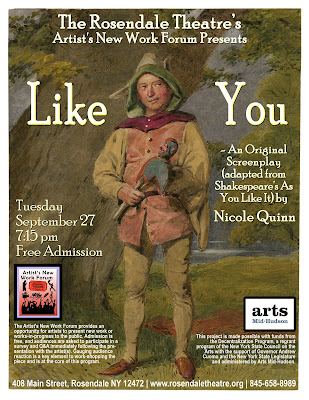 Will Rosalind find true love with Orlando after she becomes Troy?

Like You, a new screenplay from Hudson Valley writer/director, Nicole Quinn, (Racing Daylight), will be read as part of the Rosendale Theatre’s Artist’s New Work Forum.

Adapted from Shakespeare’s As You Like It, Like You is a contemporary gender bending romp set in the pastoral forest of Arden. A summer 2017 local movie shoot is planned.

Disguised as a man, Rosalind, and her cousin Celia, escape forced marriage and religious persecution to find sanctuary among hippies, red necks, and realtors in the forest of Arden.

Come and participate in the development of an indie film script. Then follow the project from script to screen!

Posted by Racingdaylightllc at 5:48 AM No comments: