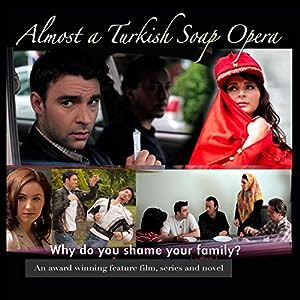 A humorous look at arranged marriages, betrayals and affairs...
Finalist New Generation Indie Book Awards 2013. Adel and Kamil,
two young good-looking Turkish men, try to immigrate to North America.
Adel's ruthless grand-uncle arranges him to marry Yonka
(his spoiled obnoxious cousin) in exchange for his immigration
status in Canada. The problem is Yonka and Adel hate each other.
The drama heats up even more when Adel has an affair with Nora,
his beautiful English teacher which ruins Yonka's plans. And to add
to this, his best friend Kamil has a big secret of his own. How did his
life turn into a Turkish soap opera? The novel paints a vivid portrayal
of the lives and struggles of young modern Muslim adults trying to
make a life in the West.
The story will attract audiences of popular contemporary movies such
as the Kite Runner and the Brick Lane. Anne-Rae Vasquez's work
includes Almost a Turkish Soap Opera (released in 2012),
Gathering Dust - a collection of poems, and Teach Yourself Great
Web Design in a Week, published by Sams.net (a division of Macmillan Publishing).
Almost a Turkish Soap Opera was adapted into an award winning feature
film and web series and is also Anne-Rae's directorial debut and was
produced by Joseph Khalil, Sababa Emporium Film Productions
(sababaemporium.com) with AR Films. Updated information can
be found at almostaturkishsoapopera.com
©2012 Anne-Rae Vasquez, AR Publishing (P)2014 Anne-Rae Vasquez, AR Publishing