"a wonderful twist on the familiar story." 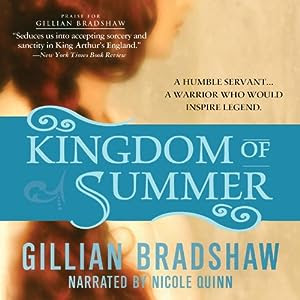 Everyone is somewhat familiar with the Arthurian legends and the story of the King and the Knights of the Round Table. Far from a very familiar feel, although presenting many of the characters in a new and different way, Gillian Bradshaw has retold the familiar story with several new twists, all unique and refreshing, that make for a wonderful story.

In the start of this story we are told of Gwalchmai’s (Sir Gawain) is starting a quest to find a long lost love that he wronged, Elidan. Used to set up the story Gwalchmai’s distraction and rather dry retelling of the history leave us with only his perspective, and while his regret is evident I most certainly would have appreciated seeing the events in real time, rather than in this retelling.

Gwalchmai’s travels bring him to stay with Rhys’ family, where dazzled with the knight and the possibility of more, he asks to sign on as his servant. From here, the story starts to gain traction with Rhys gaining in confidence and knowledge as the story unfolds. Particularly apt is Rhys’ ability in narrating the story, presenting information with his own observations, often spot on.

Unlike any other Arthurian Tale that I have read, this story manages to present a twist to the story that makes it feel very plausible and real. The world of Arthurian Britain is described with great detail and beautiful prose – sure to please history fans. There are two love stories here, that conceivably be stretched to three if the early infatuation and fascination that Rhys had with Arthur’s warband could be counted. A brief love soon cleared of its shine as Rhys is quickly learning the consequences of all actions.

Narration is provided by Nicole Quinn who aptly manages the often twisted pronunciation of names and places, many carrying the feel of the often-unpronounceable Welsh. Her own accent, and lack of great pretention in presenting the various characters, her smooth transitions and seamless transition from prose to poetic are easy to listen to and present the story with flair.

Layered with description, imagined history, danger, sorcery and the classic good versus evil conflict that fuels the story of Arthur, this is a wonderful twist on the familiar story. Best read after Hawk of May to have the full understanding, I thoroughly enjoyed this tale.

I received an AudioBook copy of the title via AudioBook Jukebox for purpose of honest review. I was not compensated for this review: all conclusions are my own responsibility.
Posted by Racingdaylightllc at 4:58 PM No comments: 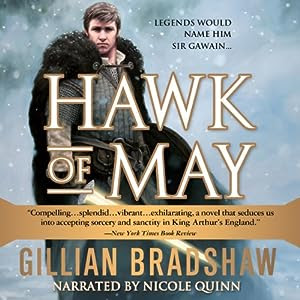 I thought I was tired of Arthurian Legend and I’ve avoided reading one for quite a while now, but Gillian Bradshaw’s beautifully written story about Sir Gawain has changed my mind. Hawk of May takes place early in Arthur’s career and is inspired by the Welsh legends of King Arthur, the Sidhe, and Cú Chulainn. I’m looking forward to reading the rest of Bradshaw’s DOWN THE LONG WAY trilogy.

In Hawk of May, we meet Gwalchmai, son of the Morgawse, the beautiful sorceress who hates her father Uther Pendragon, and who seduced her half-brother Arthur years before. Morgawse is the wife of Lot, one of the kings of Britain who, now that the Romans are gone, are engaged in a power struggle amongst themselves and are simultaneously trying to fight off Saxon raiders. It seems that Arthur is the only man who realizes that all the in-fighting must stop and the kings must band together so that the entire country isn’t overrun by Saxons. Arthur is the strongest, but when he declares himself high king, the petty kings balk at this young illegitimate up-start.

Gwalchmai is a middle son and feels like he can’t measure up to his father’s expectations. His older brother Agravain is a great warrior, but Gwalchmai’s stature and temperament is more delicate. His mother offers to train him in her arts and Gwalchmai learns to read and write before being introduced to Morgawse’s more secret powers. When he finally witnesses one of her darks rites, and realizes that she is also influencing his younger brother, Gwalchmai is deeply disturbed and runs away. Then he has a mystical experience with “The Light” and decides to find and join Arthur’s band. On the way he experiences the brutality of the Saxons and the dilapidation of the Roman Catholic Church — issues that Arthur is trying to address. When Gwalchmai finally meets Arthur, the high king will not accept him and Gwalchmai doesn’t understand why. Gwalchmai must try to win Arthur over and prove that he serves the Light. Fortunately, the Light has given him a cool sword and some special powers and eventually he develops into a warrior (which is not a spoiler because, you know, it’s Sir Gawain). There is a pro-Christian slant to Hawk of May, as you might expect from Arthurian Legend. The “Light” seems to represent Christianity while the “Darkness” represents the witchcraft and old ways of pre-Roman Britain.

Besides Morgawse, Arthur, Sir Gawain and the rest of Arthur’s band, we meet some of Britain’s petty kings, Cerdic the Saxon king, the bard Taliesin, and… dun dun dun!… Medraut (aka Mordred). Guinevere has a small role which will, I assume, become more significant later. We all know pretty much how the story goes, so there aren’t a lot of huge surprises here — oh my gosh, a Saxon raid? Really?? And Arthur and Morgawse??….. but she’s his sister! — which is probably why I don’t read a lot of stories about King Arthur, but as I mentioned, Gillian Bradshaw won me over with her lovely prose and her realistically grungy portrayal of Britain’s dark ages. Also, you could really forget that Hawk of May is Arthurian at all — you could simply read it as a coming-of-age story in which a sensitive young man experiences the Darkness and the Light and struggles to make the right choice about how he should live. The story is focused much more on characters, especially Gwalchmai and Arthur, than battles and politics.

I listened to Sourcebook’s audio version of Hawk of May. It’s almost 12 hours long and is read by Nicole Quinn. At first I was put off by the choice of a female narrator for a story written from a boy’s first person POV, and I think a male narrator would have been a better choice, but Nicole Quinn did a great job. She has a beautiful British accent and handled all the parts well. Her voice for Morgawse is absolutely (and appropriately) mesmerizing.

Posted by Racingdaylightllc at 5:49 AM No comments: