Posted by Racingdaylightllc at 4:43 AM No comments:

King Arthur, General of the Britons

Though Arthur is quite firmly established as an historical figure, there appears to be little evidence that he was the King of tradition. To quote Nennius,

Arthur fought...together with the Kings of the British; but he was Dux Bellorum.

This would seem to confirm the popular view today that Arthur was a professional soldier: a brilliant military leader employed in an official capacity by an alliance of British Kings to carry out their warfare against all coming enemies.

"Dux Bellorum" translates literally as Duke of Battles. This might be comparable to the Roman "Dux Britannorum" in charge of the Northern British defences. Though many think the Roman "Comes British History Clubrum" a better fit, for he led mobile cavalry forces across the country, as perhaps indicated by Arthur's supposed widespread battles.

None of this, however, precludes Arthur from also being a King. Nennius may have intended his phrase to imply that Arthur was one of the Kings alongside whom he fought, yet he was the greatest warrior among them. If the more formal title of Dux or Comes was meant, then perhaps a High-Kingship is implied as tradition would suggest. Early sources, no doubt, assumed that everyone already knew Arthur was a King, as with most Royal entries in the Annales Cambriae. There was no need to announce it.
Posted by Racingdaylightllc at 4:38 AM No comments:

Timeline of the Wars of the Roses

Posted by Racingdaylightllc at 3:41 AM No comments:

Campaign History:
Invasion of Russia1813 Liberation of GermanyDefence of France
The 7th Coalition1815

Posted by Racingdaylightllc at 3:35 AM No comments:

http://www.britannia.com/history/h17.html
Geoffrey Ashe is an internationally known historian, author and lecturer who writes extensively in the areas of British history and mythology. In his career, he has written more than 20 books and has contributed numerous articles to scholarly publications. He has held visiting professorships at seven American universities and has been involved with television projects related to King Arthur and British mythology in the capacity of advisor, interviewee and commentator.
He was the co-founder and secretary of the Camelot Research Committee, the group responsible for the 1966-70 excavation of Cadbury Castle, a strong candidate for the site of King Arthur's Camelot. Mr. Ashe enjoys wide public recognition and acceptance of his works and is arguably the pre-eminent popularizer of the history and legends of King Arthur in the world, today.
We met with Geoffrey Ashe for the first time in Glastonbury, Somerset, in early April, 1995. Our meeting took place in the sitting room of the George and Pilgrims Hotel, a medieval hostelry which had been constructed to accommodate pilgrims to the famous abbey, there. We spent a fascinating day talking about King Arthur and touring some of the Arthurian sites in and around Glastonbury.
Mr. Ashe had been a favorite of ours, for years. We had read a number of his books and were impressed with what he said and the way he said it. He presented his material in an engaging, conversational way. His writing made the legends and the locales come alive in a way that the more "scholarly" books don't. In recent years, there have been many new theories about the "true identity" of King Arthur and, quite frankly, some of them are pretty off-the-wall. Ashe's ideas, on the other hand, are derived from a careful evaluation of existing historical material combined with a willingness to think unconventionally, when conventional thinking leads to a dead end. Unravelling the mystery of King Arthur at a distance of 1,500 years is uncertain and difficult work, at best, and one should not be too dogmatic about the conclusions one reaches. To us and to many others who have read his books, though, Geoffrey Ashe provides a solution to the problem that makes alot of sense.
Our association has continued and we are pleased to present Mr. Ashe to you. He was interviewed by Britannia publisher, Rod Hampton. Click below to read the interview.
Interview with Geoffrey Ashe
A Quest for Arthur
Part one in a series of articles by Geoffrey Ashe, providing the foundation for a proper understanding of the legend of King Arthur.
Magical Glastonbury
There are certain special places, where you get a feeling that is different from any other place you've ever been. Glastonbury is one of those places. Ashe explains what it is about this town that makes us feel that way.

Posted by Racingdaylightllc at 3:24 AM No comments:

The life and career of Sir Thomas Malory, the author of Le Morte d’Arthur (The Death of Arthur), one of the greatest literary works of medieval England, illustrates how the quarrel between the houses of LANCASTER and YORK forced even politically insignificant members of the English GENTRY to choose sides.

Because little is known about the writer of Le Morte d’Arthur, historians have debated which of several fifteenth-century Thomas Malorys was the author. The most likely candidate is Sir Thomas Malory of Newbold Revel, a Warwickshire knight whose sketchily preserved life best fits the few facts definitely known about the Arthurian writer. In the concluding paragraphs of Le Morte d’Arthur, the author stated that the book was completed in the ninth year of EDWARD IV by “Sir Thomas Malory, knight,” and also requested his readers to pray “that God will send me good deliverance” (Malory, p. 750). The writer was thus an imprisoned knight who finished his work between 4 March 1469 and 3 March 1470.

Sir Thomas Malory of Newbold Revel was knighted about 1441, and served in PARLIAMENT in 1445 and again in 1449. Malory’s life in the 1440s was unexceptional, but he spent most of the 1450s in various LONDON jails. His imprisonment was the result of a crime spree that began in January 1450 when Malory reportedly lay in ambush, with armed men, to murder Humphrey STAFFORD, duke of Buckingham. In May and again in August, Malory was charged with rape and extortion. In June 1451, Malory and a band of accomplices were accused of stealing livestock, and, in July, Malory and his confederates threatened a house of Warwickshire monks, an action that led to the issuance of orders for his arrest. On 20 July, while Buckingham and a party of sixty men searched for him, Malory and his accomplices vandalized the duke’s deer park at Caludon.

Because such violent crimes conflict with the chivalric values enunciated in Le Morte d’Arthur, the authorship of the Newbold Revel Malory has been disputed. However, the charges against him may have had more to do with local political rivalries than with outright criminality. Malory’s transgressions, which probably originated in a private quarrel with Buckingham, soon entangled Malory in the national political struggle. After Malory’s capture in July 1451, the Lancastrian government imprisoned him without trial through the mid-1450s. Because the Lancastrians seemed intent on keeping him confined, and because he had shown himself capable of raising and leading large numbers of men, Malory probably attracted the attention of the Yorkists, who in the late 1450s were seeking any possible supporters. In 1457, after being temporarily released on bail through the good offices of the Yorkist lord, William NEVILLE, Lord Fauconberg, Malory likely became an adherent of Richard NEVILLE, earl of Warwick, Fauconberg’s nephew and Buckingham’s chief rival in Warwickshire. In early 1462, Malory used Edward IV’s general pardon to win his release and wipe out all charges against him. In late 1462, Malory participated in Edward’s campaign against the Lancastrian-held castles in northern England.

Although no legal records confirm the statement in Le Morte d’Arthur that he wrote while a prisoner, Malory was one of only fifteen people excluded by name from a general pardon issued by Edward IV in July 1468. This exclusion raises the likelihood that Malory was arrested by the Yorkist government some time in 1468 and remained in confinement until the restoration of HENRY VI in October 1470, over six months after the stated completion of Le Morte d’Arthur. Although the reasons for Malory’s imprisonment are unclear, the probability is that he was somehow involved in a shadowy Lancastrian conspiracy known as the CORNELIUS PLOT, which came to light in June 1468. Many of the men excluded from the pardon with Malory were Lancastrians implicated in the plot. According to his tombstone in Greyfriars Church in London, Malory died on 14 March 1471, only a month before the restoration of Edward IV would likely have again jeopardized his freedom.

Arthur, King of the Britons 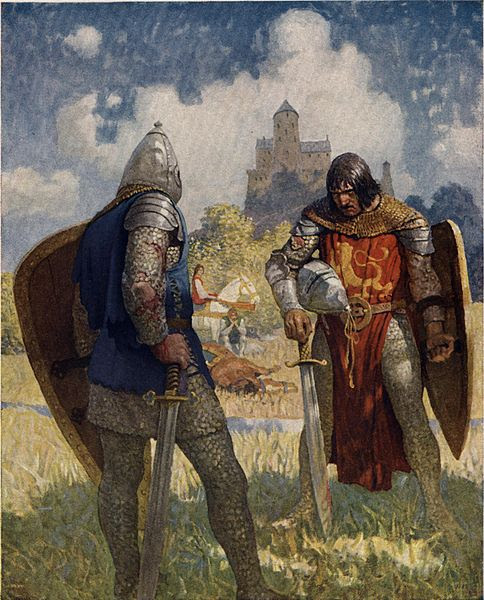 Posted by Racingdaylightllc at 4:03 AM No comments:

While most of Napoleon Bonaparte's orders fell to his marshals, many other leading figures helped mould the shape of Revolutionary and then Napoleonic France.


How France's Generals Rated
Posted by Racingdaylightllc at 3:58 AM No comments:


Posted by Racingdaylightllc at 3:56 AM No comments:

Origins of the Wars of the Roses

Posted by Racingdaylightllc at 4:07 AM No comments: