AudioBook Review Kingdom of Summer: Down the Long Wind #2 by Gillian Bradshaw

Everyone is somewhat familiar with the Arthurian legends and the story of the King and the Knights of the Round Table.  Far from a very familiar feel, although presenting many of the characters in a new and different way, Gillian Bradshaw has retold the familiar story with several new twists, all unique and refreshing, that make for a wonderful story.
In the start of this story we are told of Gwalchmai’s (Sir Gawain) is starting a quest to find a long lost love that he wronged, Elidan.  Used to set up the story Gwalchmai’s distraction and rather dry retelling of the history leave us with only his perspective, and while his regret is evident I most certainly would have appreciated seeing the events in real time, rather than in this retelling.
Gwalchmai’s travels bring him to stay with Rhys’ family, where dazzled with the knight and the possibility of more, he asks to sign on as his servant.  From here, the story starts to gain traction with Rhys gaining in confidence and knowledge as the story unfolds.  Particularly apt is Rhys’ ability in narrating the story, presenting information with his own observations, often spot on.
Unlike any other Arthurian Tale that I have read, this story manages to present a twist to the story that makes it feel very plausible and real.  The world of Arthurian Britain is described with great detail and beautiful prose – sure to please history fans.  There are two love stories here, that conceivably be stretched to three if the early infatuation and fascination that Rhys had with Arthur’s warband could be counted.  A brief love soon cleared of its shine as Rhys is quickly learning the consequences of all actions.
Narration is provided by Nicole Quinn who aptly manages the often twisted pronunciation of names and places, many carrying the feel of the often-unpronounceable Welsh.  Her own accent, and lack of great pretention in presenting the various characters, her smooth transitions and seamless transition from prose to poetic are easy to listen to and present the story with flair.
Layered with description, imagined history, danger, sorcery and the classic good versus evil conflict that fuels the story of Arthur, this is a wonderful twist on the familiar story.  Best read after Hawk of May to have the full understanding, I thoroughly enjoyed this tale.
Stars Overall: 4  Narration: 4 Story: 5
I received a copy of this title from AudioBook Jukebox for purpose of honest review. I was not compensated for this review: all conclusions are my own responsibility.

Posted by Racingdaylightllc at 5:30 AM No comments: 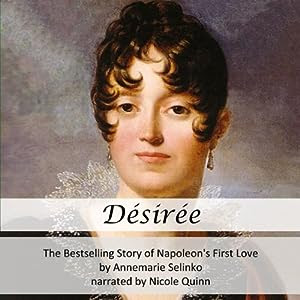 "Wonderful performance for a fascinating story"

What made the experience of listening to Desiree: The Bestselling Story of Napoleon's First Love the most enjoyable?
The story is wonderful. I knew how it was going to end more or less, but found myself totally involved in the story and characters. Loved the history from a woman's perspective. Sure the battles are mentioned and described, but briefly and only so you can understand their impact on the characters' lives. Loved the lavish detail on hair, makeup and clothes. She is after all a silk merchant's daughter. In contrast to most portrayals of women of the 18th century, the main character is so much more sophisticated, intelligent, complicated, flawed and intuitive then normal history ever gives women credit for, yet remains feminine. This is in contrast to some strong modern female characters who seem to swear, drink, and fight like a man and only indicate femininity by admitting to a love for chocolate.

Posted by Racingdaylightllc at 6:51 AM No comments:

To Recapture a Rake: A Hephaestus Club Novella 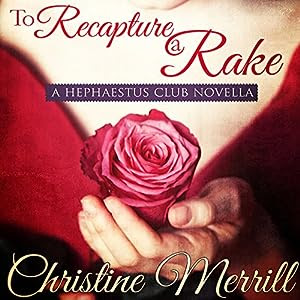 A reluctant rake and a ruined woman with nothing to lose are a perfect match in this delightful comedy of manners from Christine Merrill....
Vincent Wilmont, the Earl of Blackthorne, makes a point of living up to his reputation as a rake, even though his heart isn't quite in it. Indeed, his heart rests with Caroline Sydney, the ruined woman who'd gone to his bed in passion after she'd rejected his cool-headed offer of respectable marriage. A year later, she's cast him off, humiliated him in front of all of London society, all because he made the damn-fool mistake of telling her he loved her.
Women.
Blackthorne's public humiliation earns him admittance into the Hephaestus Club, a secret brotherhood of societal rejects, and there he swears never to marry, putting money down on the oath. When the wager provides a motivation for a smart, if skint, gentleman matchmaker to cash in, Blackthorne and the fiery Miss Sydney find themselves the starring players in a romantic farce filled with duels, declarations, and passionate trysts as they rocket down a path toward a horrifyingly respectable future as man and wife.
©2014 Christine Merrill (P)2014 Christine Merrill
Posted by Racingdaylightllc at 6:37 AM No comments: