From the collection of the University of Washington Libraries:
FRENCH CARICATURES 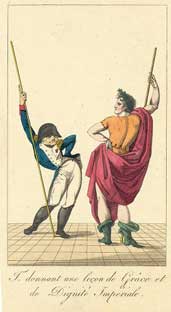 Talma, the figure shown with Napoleon, was an actor known for his success in Greek theater; the artist suggests that Napoleon needs lessons in how to act like an emperor. 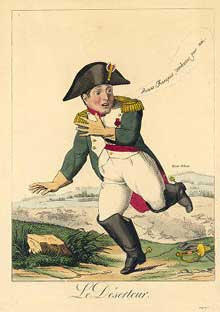 During the debacle of Waterloo, Napoleon fled the battle field, ostensibly to return to Paris to organize its defense. This was a disastrous move. Afterwards, the Royalists wanted to make sure he was discredited for his, and used caricatures such as this to stress his flight 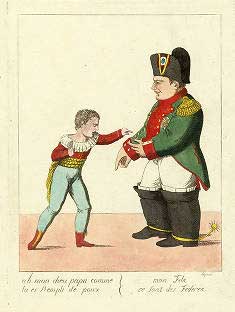 In this print, he flicks fleas off his coat, dismissing his son's concerns by saying the vermin are only the fédéres (revolutionary ruffians who had staged a huge rally on Bastille Day 1790.) 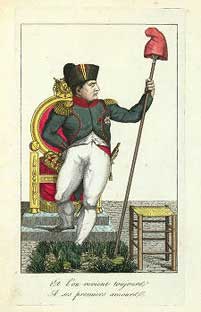 
The royalist artists also continued to remind the bourgeoisie of Napoleon's link to the revolutionaries, using prints such as this one that proclaims that “one always returns to one's first love”. 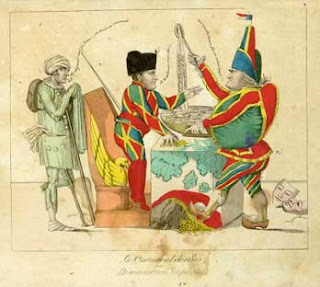 The strands of macaroni represent the many conscriptions that were necessary to replenish Napoleon's armies, and the bags of money show the resources that continued to be expended on the constant state of war. 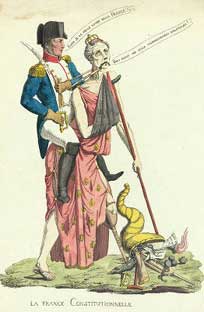 In “La France Constitutionelle” the artist shows a gravely wounded France, being ridden by a victorious Napoleon. Papers spilling out of the cornucopia at her feet are labeled “forced loan, levy of 400 million…”

Posted by Racingdaylightllc at 3:17 AM